We will discuss the physical and mental benefits of Pilates as we age. I will also share some easy exercises that people can do to keep their bodies and minds sharp.

Listen to the Podcast 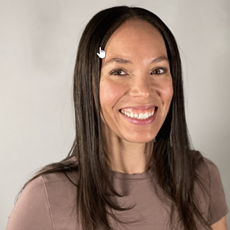 Gia Calhoun is a Pilates teacher based in Los Angeles, California, who has been teaching Pilates since 2007. She has been working for Pilates Anytime since 2013 and is the Vice President.

Growing up as a dancer in southern California, Gia started Pilates when she was 15 after a recommendation from one of her teachers to help with a recurring hip injury. She continued to study Pilates for the remainder of high school while she was training to become a professional ballet dancer. After she graduated, she enrolled at the University of California, Irvine, where she was a dance major. After her first year, she took a leave of absence and joined Columbia City Ballet as a member of the corps de ballet. She later returned to school and received her B.A. in dance in 2007. During her final year of college, she simultaneously completed her Pilates teacher training with Diane Diefenderfer at Studio du Corps.

Upon graduation, Gia moved to Pittsburgh, Pennsylvania to dance with Pittsburgh Ballet Theatreand to teach Pilates at their school. She also taught Pilates at The Pilates Center of Pittsburgh. When she moved back to Los Angeles, she taught at various gyms, studios, and physical therapy offices in the area before finding a home at West LA Pilates. She taught there for five years before transitioning to a full-time employee of Pilates Anytime.

Gia continues to dance in a local ballet company, the Kenneth Walker Dance Project, who performed a tribute for Joseph Pilates at the 2017 Pilates Method Alliance conference.